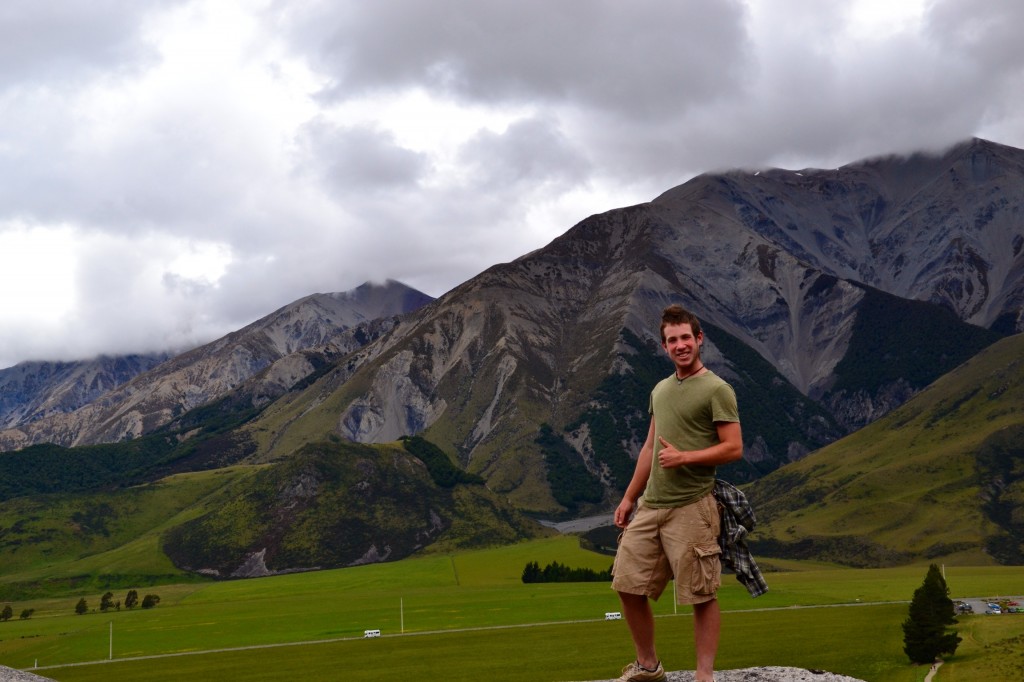 My name is Mark Largey and I am a 22-year-old American, from Massachusetts, who has been living in New Zealand for exactly one month. During the short time that I have been here, I have fit in very well with the culture, grown close to my host family, and have had a handful of experiences on the farm and outside the farm that have given me some good life experiences.

I come from a vegetable and fruit farm located in Leominster, Massachusetts called Gove Farm. Gove Farm hosts around four international trainees every year from companies such as CAEP and for six years I have had the pleasure of working with trainees who have come from Brazil, Ukraine, Russia, France, Honduras, Nicaragua, Haiti, and Switzerland. I have not only had the chance to train and supervise these trainees, but each year I always volunteer to make them feel especially welcome by taking them out around Leominster. Towards the end of each season, I had ultimately formed a very strong bond with each trainee and I can say that I have made some life-long friends that are located around the world.

While I always share advice and help the trainees to feel at home, I was recently given advice in return from two trainees in particular: Leonardo, of Brazil, and Sascha, of Switzerland. They both displayed a very optimistic attitude about being so far away from home and traveling around for months on end for their educational experience that I really grew to respect them. I never thought that I would be able to travel around like they were. They challenged me, however, by suggesting that I try the same. I was coming to the end of my university education at Fitchburg State University and did not have any immediate career plans, so I decided that traveling would be great idea.

I mentioned my plans to my boss, Paul Gove, and his father, Warren Gove, and they both suggested travelling to New Zealand. I contacted CAEP and after a little bit of paperwork, I am here in New Zealand for 10 months, working on the farm of my choice, having a life-changing experience, and having a blast!

For my New Zealand host farm, I decided to work in the Sefton suburb located in Canterbury on Grown Farm for the Bookers. I chose this farm because it is very similar to what I am used to at home, which is a small vegetable farm. I thought that things would be more or less the same, such as using the same equipment and techniques, but working on this farm has proven to be quite a unique experience. It has been great for me to be the “new person” on this farm because it really makes me appreciate how versatile agriculture can be and that there are certainly many ways to run a farm.

Though both farms are quite similar in technique, they have entirely different planting and work schedules because of the difference in climate. Gove Farm is inactive during the winter because temperatures consistently reach below freezing in New England, so aside from pruning peach trees and tractor maintenance, there is not much to do. I still have a lot to experience with Grown Farm, but so far, things do not feel too different from home, just the scheduling and weather.

The machinery used by each farm has been very similar except for the style of irrigation. Both farms use big and small tractors with various attachments to till up soil, prepare beds of soil, lay down plastic, and drill seed into the ground. Each farm also has a small utility vehicle that is used to move around workers, plants, and anything else that can fit in the back; for Gove Farm it is a John Deere gator, and for Grown Farm it is a quad-bike with a trailer attached. 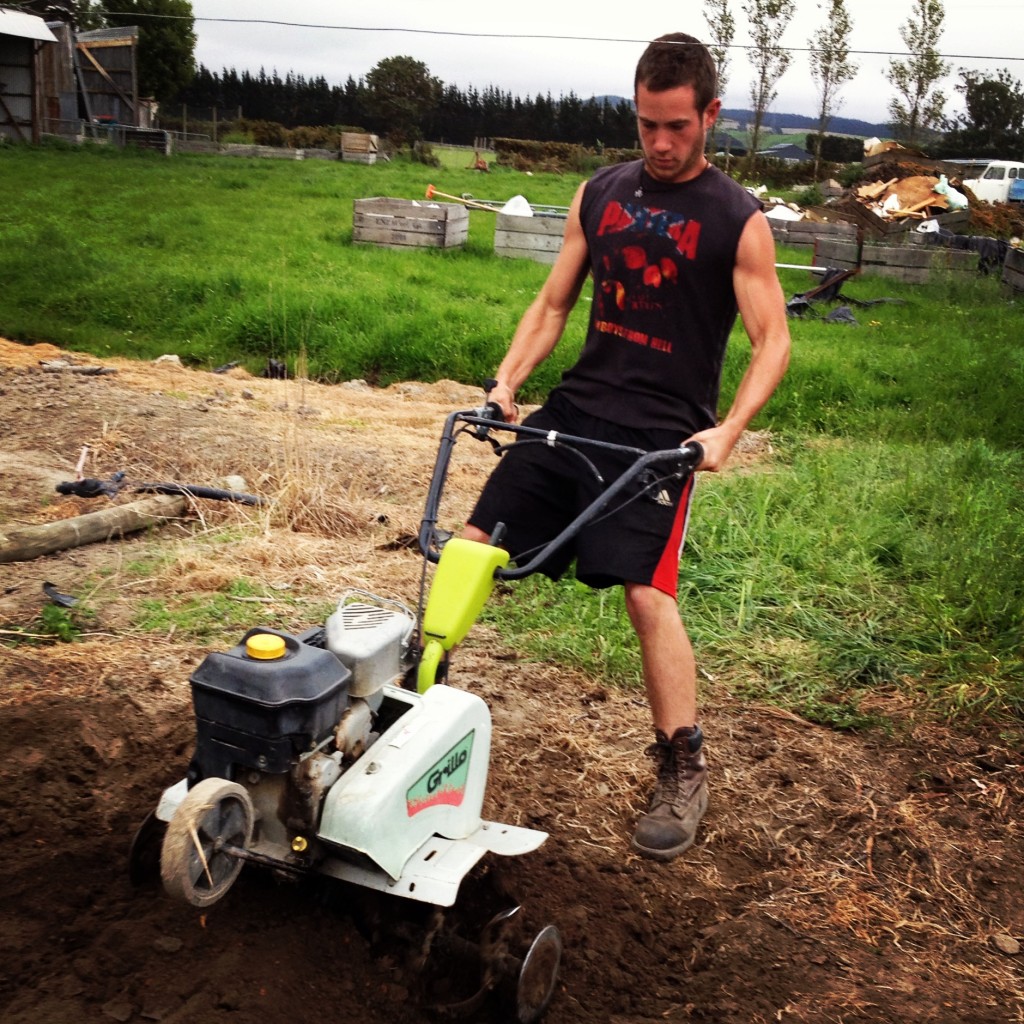 When the farms are compared size-for-size, the irrigation system seems to be pretty similar. The irrigation on Gove Farm is controlled by a central pump located on a pond behind the farm that feeds into an underground system of large, metal pipes that have a hydrant for each paddock located throughout the farm. Each hydrant is then fed a varying number of pipes that can connect to each other and run out a certain distance to feed either small or massive sprinkler heads that can cover distances that range from a 10 to 60 foot radius. On Grown Farm, I am still trying to figure out the irrigation system, but there is a pump that is located above ground and it is fed by large drums. The underground pipes are small and made of plastic and there are only a couple of hydrants located around the farm. Each hydrant is used for a variety of fittings, such as a drinking trough, a line of small sprinklers, or an 80m plastic pipe that feeds a moving sprinkler on wheels. On Gove Farm, the irrigation is usually only run during a heat wave or when there is a bit of a drought, but on Grown Farm, the irrigation is usually run 24/7 because of how dry it gets from the winds and how unbearably hot it can get during the summer.

Another big difference is how each farm gets its revenue. On Gove Farm, we have the luxury of being on the outskirts of a couple of fairly large cities, so we are able to set up one big farm stand on the side of the road and have a consistent customer base and we only need to pick what is necessary for the day. On my host farm in New Zealand, we are located in the suburb of Sefton that is located very far away from large populations of people, so we harvest enough crops every Thursday and Friday to suit the needs for eight nearby farmers markets on Friday-Sunday. For me, this has been very different compared to the farm stand, because I am not exposed to customers for half the week, and when I do go to markets, it is only for a couple of hours, so sales are condensed and quicker. Each farm is very successful with how they sell their produce, so it has been a learning experience for me primarily on the business end of farming.

Aside from the farm life, I have enjoyed everything that New Zealand has to offer in my short time here. I took up motorcycling as a hobby when I got here and purchased one right away so that I can enjoy the New Zealand roads and scenery with my free time. So far, I have traveled to places such as Hamner Springs and Gore Bay and have been mesmerized by the beautiful green scenery. My motorcycle has also helped me get to places to hike on weekends and to nearby towns to check out city life. Everything in this country is wonderful, from the small towns to the mountainous roads, to the friendly people who are always ready to have an in-depth conversation with you. I have also found New Zealand to be a haven for tattoo lovers like myself. I have only been here a month, but I fully expect many more experiences both on the farm and outside of the farm to deepen my love of agriculture and this country. 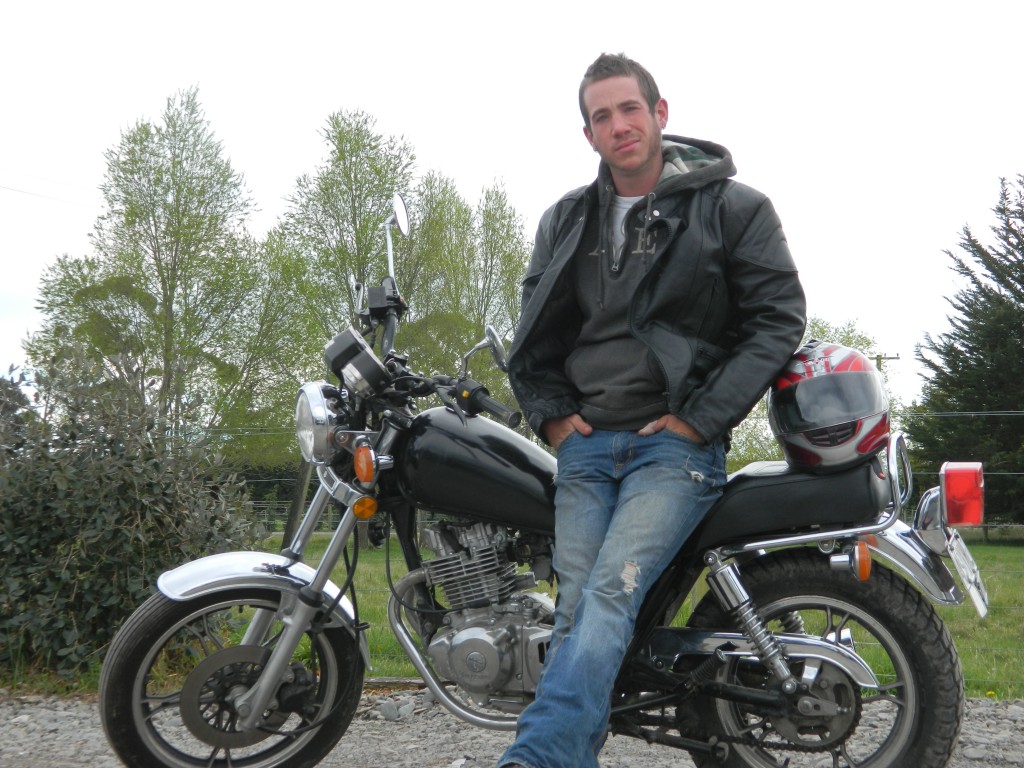